This walking tour of John Cornford and Madrid’s Western Front is covered in Dr David Mathieson’s fully illustrated guide to the battlefield sites of the civil war around Madrid.   Click on the icon to order your paperback or kindle copy

In the November 1936 Madrid became the focus of world attention. The capital of Spain was the seat of the Republican government which General Franco’s rebel army was dermined to overthrow and few expected the city to survive the final assault  Yet Madrid did not fall.  Ordinary Madrileños and volunteers from the International Brigades fought tooth and nail  defend Madrid in the parks, streets and university campus close to the city centre.  Under the famous slogan ‘No Pasarán’ (they will not pass) Madrid held firm and rising tide of fascism stemmed.  It is an extraordinary tale of an exceptional time driven by remarkable people. 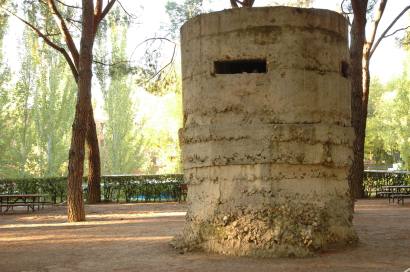 This popular exploration of the Spanish civil war and Madrid’s Western front can be done as walking tour or by bike.

Our walk will explore the front line of the fighting and battlefield on the western side of Madrid where the most important action took place.   We will visit the Parque Debod (Debod Park), Parque Oeste (West Park) and University campus stopping along the way to see the remains of the civil war which are still there today (above). Looking out over the river Manzanares and the Casa de Campo we will see the nationalist artillery positions from which they shelled the city night and day. On the bike tour will head down river to see the remains of the Pasarela de la Muerte (gangway of death), used to supply Franco’s troops on the University campus.  We will walk along the front line and visit the key points of interest in the University.  Many of the buildings still bear scars from the fighting and remain in silent testament to the war.

The walking tour will also tell the story of the volunteers of the International Brigades, like writer John Cornford, who came to fight for the republican cause in Spain. And on the university campus we will see the only memorial in Madrid to the those volunteers many of whom, like Cornford, fought – and died – in the fighting across the university.

The faculty building as it looks today 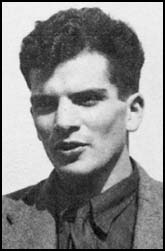 John Cornford was one of the young International Brigade volunteers.  Born into a family of distinguished academics – he was Charles Darwin’s great grandson – Cornford graduated from Cambridge in 1936 with a First class degree. Like many anti-fascists of his generation, he was a communist and quickly joined the Spanish republican forces to fight in the civil war. Cornford was badly wounded in the fighting at university and a month later, on his 21st birthday, he was killed in action. His body has never been recovered.